Conservative activist Charlie Kirk is launching a massive get-out-the-vote campaign Tuesday aimed at identifying and enlisting 1 million student supporters of President Trump ahead of the 2020 election.

The “Students for Trump” campaign will look to target students on more than 300 campuses, in what Kirk describes as the biggest operation of its kind.

“This is the most aggressive voter identification GOTV program targeting students on college campuses for a Republican president ever,” Kirk told Fox News. “The road to the White House goes straight through college campuses and the left is targeting a lot of their messages on policy directly toward students—student loan forgiveness, unrealistic socialist programs—we’re doing everything we can to make sure Trump does get re-elected.”

Kirk told Fox News that “Students for Trump” has a budget of $15 million, 150 staffers and a presence on more than 1,400 college campuses due to its affiliation with Turning Point USA. He described it as a “nationwide effort” with a “hyper-focus” on key swing states.

Kirk told Fox News that the goal is to “identify” Republicans on campuses and motivate them to the polls with pro-Trump rallies, voter registration events, digital advertising and more.

“We’re going to encourage students to vote in the states where their campuses are,” Kirk said, specifically referring to students at colleges in Florida, North Carolina, Wisconsin, Michigan, Nevada, Iowa, Pennsylvania and Ohio—key states critical to a Trump victory.

“Democrats believe that this is their path of least resistance—that they’ll be able to waltz onto campuses, put their messages across with little to no cross-examination, and what we’re doing is going to be a very large component,” Kirk said.

He’ll have his work cut out for him.

According to a Gallup poll from March, only 28 percent of voters between the ages of 18 and 29 approve of the president’s job performance.

And Democratic presidential candidates indeed are openly appealing to students with student loan forgiveness programs and other promises of free or subsidized higher education.

Kirk argued, though, that “Students for Trump” will bring “much-needed sobriety and reality to political promises being made by the left.”

“The probability that these gallivanting politicians will be able to forgive massive student loan debt and deliver free health care is quite low,” he said. “It would add decreased economic mobility and freedom and opportunity, and adding this type of reality is so overdue and needed.”

Kirk added that while it is “very difficult to run up against an entire political party” pushing for student loan forgiveness, he argued that “a large part of the college population includes students who went to community college first and worked their way through college.”

“The majority of students do have student loan debt, but there are a fair amount of students that work and have been paying off their student loans religiously—do they get any form of reimbursement?” Kirk said. “We will target those students in these key states that have worked their way through college—and there are plenty of them.”

Kirk added that the issue of student loan debt forgiveness is being used by Democrats as “a carrot to make more students go vote for them, despite the unrealistic nature of it.”

“We see Trump policies working for young people, whether it be the best economy, lowest unemployment, or wages finally going up for the middle class—we want to get that reality out there in the face of a massive Democrat campaign,” Kirk said. “The battle of ideas is going to be more consequential on college campuses in the next 18 months than I think ever before.”

The president’s eldest son is expected to be involved with some of the group’s events.

“I am thrilled to see [Kirk] and his successful team focus on motivating and turning our college students to help my father get reelected in 2020,” Donald Trump Jr. said in a statement.

The Students for Trump launch party is scheduled to be held next month in Las Vegas, timed with the start of the fall semester.

‘I’d rather go to jail’ than yield to city in American flag controversy: Camping World CEO States, Would You Go to Jail for the American Flag? 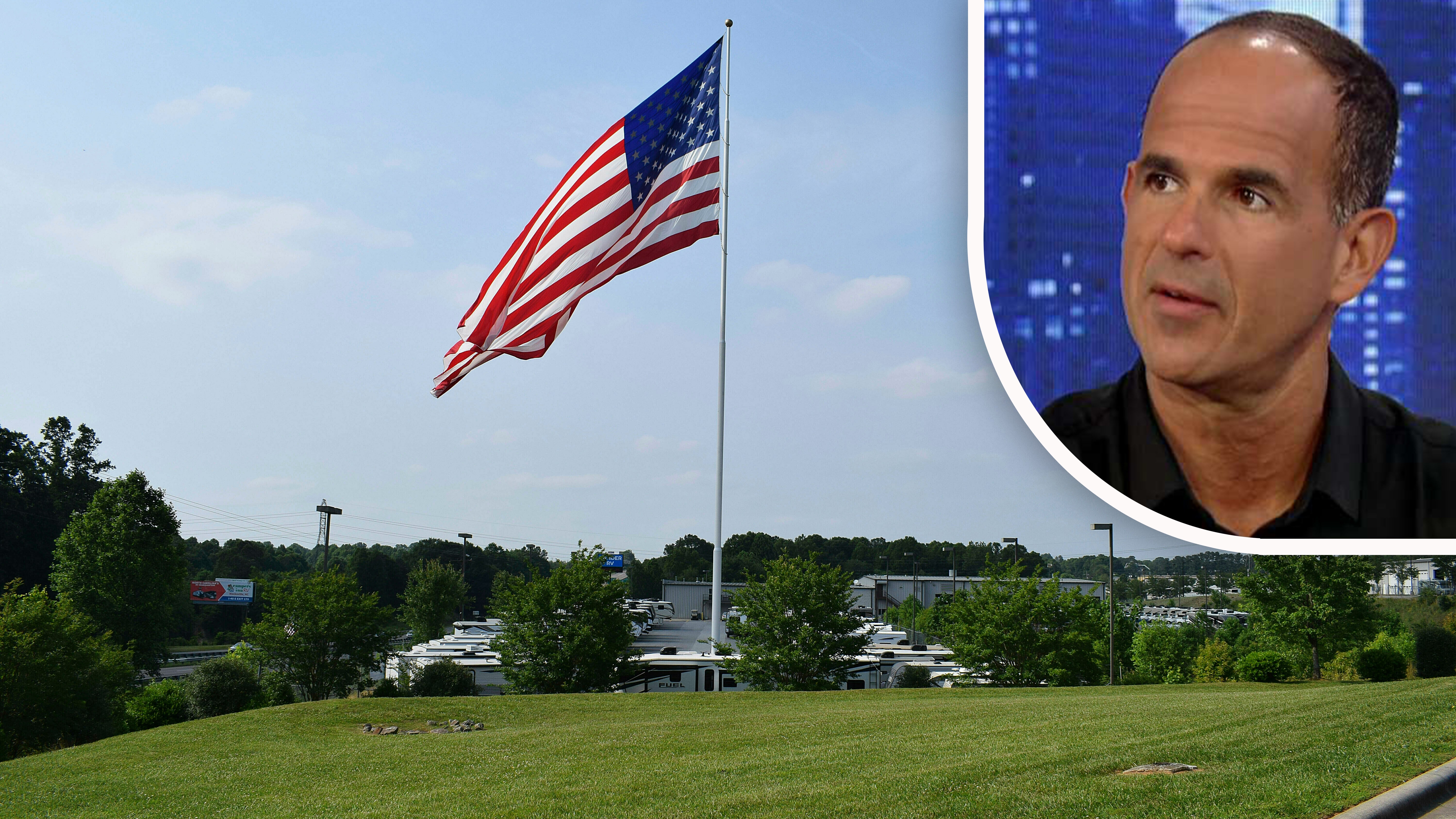 The chief executive of a major RV retailer said he will not bend to a North Carolina’s city’s demand he reduce the size of an American flag flying on his property.

Camping World CEO Marcus Lemonis dismissed the $50-per-day fine, criticism from the Statesville government and prospect of future imprisonment in an interview Monday with Martha MacCallum on “The Story.”

“The ordinance doesn’t matter to me,” he said, referring to the law governing the size of flags.

“If you look at the North Carolina statute, it says as long as it’s not impairing someone’s health and well-being it’s not a big deal.”

Lemonis then added local politicians told him the flag could endanger someone because of its size and its proximity to Interstate 77.

“They made the claim it could cause an accident on the freeway because it was too distracting — it was too beautiful,” he said of the 40×80-foot banner.

However, he admitted keeping the flag as-is is against the law.

“There’s no question that I violated that ordinance,” the businessman added.

“When veterans show up at the stores for the flag raisings, and when they come on Saturdays and do their veteran rides, and they weep at the bottom of the flagpole, that’s the conviction that I need to say it’s just not going to come down. I would rather go to jail.”

MacCallum asked Lemonis if he could possibly be imprisoned.

The businessman responded it was a distinct possibility, but reiterated he was not concerned.

“The city of Statesville filed a lawsuit about two months ago,” he said.

“If I don’t take it down I will be in violation of the court order. Ultimately, their reaction is from the city is that I will go to jail.”

DEMOCRAT IDEOLOGY IS THE DISEASE OF PSYCHOPATHY!

DEMOCRAT IDEOLOGY IS THE DISEASE OF PSYCHOPATHY! We continue to see the democrat party degrade to a bunch of Zombie Monsters. Where everything can be isolated down to LIBERALS starting the hatred, with MSM, “The enemy of the people”, It was “Slander from the media” and attacks from Democrats with this Psychopathic disease, beating, that […]

Trump has different views on Guns than the majority of Republicans

Time to drain the pipes of the swamp from these Leftist LGBTQ elites!

After Milo’s fake scandal, Dr. Drew Pinsky pointed out the peculiar fact that that Milo’s scandal involved a pedophile VICTIM being accused of “endorsing pedophilia.” What an insightful man Dr. Drew is! You would think that gay journalists could also come to Milo’s defense after these ridiculous accusations. On the contrary, several gay newspapers–such as […]